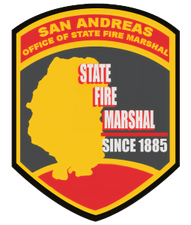 The Command & Supervisory teams have been in discussions due to recent spike in activity in the State Parks that proactive measures should take place from our office to prevent wild & brush fires. To increase presence and enforcement around said areas, we have decided to implement a new operation into the office named 'Fire Watch' — FW is a patrol done by Fire Marshals in the State Parks and surrounding areas, with the direct intention of Fire Code enforcement, specifically Chapter 4, Section 401.

More details on the Mutual Aid Agreement may be found here, effective from the 16th of May, 2021.

(( On an OOC note; this is done due to the activity spike in the state parks with the implementation of the hunting script. Players more often than not roleplay setting camps and whatnot around the State Parks and with that, put up bonfires and the likes. Be sure to remember that our intention with this patrol is not to issue hefty fines, rather just interact with the community and provide players with interesting roleplay, along with SAPR.
Another important note is to make sure that we do not step on SAPR's toes and act as a Law Enforcement agency in the State Parks. Any and all illegal activities should be reported to SAPR to handle; that doesn't mean that you should ignore illegal activities, simply act as you would in the city. ))